A Break From Business-As-Usual

Even before the pandemic, we were a largely remote company accustomed to using video conferencing software for meetings. However, as the pandemic has worn on, we’ve yearned for some kind of team building, socialising or just an escape.

With experience in running creative workshops, I saw a great opportunity to try out something new for iov42 – a fully virtual day of brainstorming and team building to co-create new ideas for the company to explore. The management team gave me full support to gather a small team to make something happen.  And that’s exactly what we did!

Usually these types of workshops are held in person, so running it remotely was going to be a challenge. Luckily, iov42 has discovered two pieces of software to be invaluable for creating a more “together” experience: SpatialChat and Miro.

There are many benefits to running workshops in-person, and most of it comes down to one word: feedback.

You get feedback from the audience, i.e.:

And you can give feedback to the audience, as well as individuals, in order to:

Miro and SpatialChat help, in various ways, to restore some of this feedback.

Even if you’re not running workshops, I highly recommend checking these tools out for better remote collaboration.

Taking inspiration from a workshop I ran for Schibsted some years ago, I set up an agenda as follows:

For the “idea generation” parts of the day, we used the 3×3 technique that my business partner and I designed. This is a great technique to allow people to interact and feed off each other’s energy, giving everyone time to speak and participate.

Many people have a clear opinion of whether they’re a “creative person” or not, and this can influence their willingness to engage in an activity like this. The 3×3 technique uses quick rounds with high-levels of engagement to give everyone a chance to test their creativity. Regardless of how many ideas you have at the beginning, you’re stimulated by other people’s ideas each round, so new and unexpected ideas start appearing even if you were originally drawing a blank. It’s no panacea, but it’s as close as. I’ve always seen good engagement when I’ve used this technique.

For the day, we wanted to:

The goal was to find a way to stimulate people with more ideas and to increase the number of people any one person would be interacting with across the day. This feeds well into goals of socialising, cross-pollination and encouraging serendipity.

It was important to get a clear view of attendance upfront because there wouldn’t be enough time on the day to figure out team allocations.  We took an educated guess at who would be coming and began putting everyone into groups. Then we sent a calendar invitation to everyone and prodded people to respond to it. We ended up only having to make one minor tweak to the teams on the day.

As the overall organiser, I also wanted to participate in the whole brainstorm so I needed a way for everyone to be able to get on with things without needing me to monitor or actively guide them. This drove my idea to set Miro up like a board game. I set up “team tables” on Miro as pentagon shapes (one side for each team member), with placeholders at each side where people would “sit”. A sticky note for their name and then a bundle of sticky notes ready to have ideas written on them. I then prepared some step-by-step instructions so that, on the day, I could just say “Get into your teams, find a place at the table and follow the instructions.”

The Miro board game, for one team:

I wanted to make it easy for everyone to gather on Spatial as well, so I prepared a custom background. We ended up with 4 teams of 5 people each, so I prepared a background with obvious visual spaces for people to gather and made extensive use of the “megaphone” feature to address people all at once. 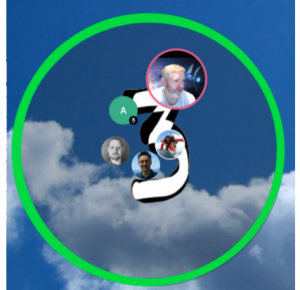 After the introduction, it was time to get started. Team rosters were added next to each numbered circle, acting as a seating plan. When people were gathered within each circle they could hear their team and not be disturbed by what other teams were doing, well facilitated by SpatialChat’s technology.

Back on Miro, I prepared a template for “idea generation, part 2” as well as the “poster visualisation” round. I was then able to use the “Frames” feature to name parts of the board according to the day’s agenda and even hide frames that were not relevant yet.

The Part 2 template was largely the same as Part 1, except people were asked to bring their favourite ideas over from the first stage. The idea was that, since people would be joining new teams, this would give a gentle way to introduce everyone to what happened in the other teams in the previous round.

The final round was to be the poster generation round — A chance for people to enjoy and express themselves a little more with this broader, freer form of creativity. The summary of the round is basically “take your favourite ideas and turn them into posters.” I set up instructions and placeholders on Miro, continuing the board game idea. And since I was a little unsure how confident people would be with the tools or what a poster should look like, I tried to add some useful tips.

It ended up not mattering, when the time came, people just dove in and produced a huge array of posters!

The last part of the workshop was to vote for your favourite posters. For this, we found a way to use Miro’s voting feature. You can place “cards” on the board and then ask Miro to let everyone vote on those cards. There’s no inbuilt restriction on number-of-votes-per-person so I asked everyone to follow the honour system and dutifully count their own votes. People had 5 votes each and voted on their favourites, and we then shared the winners on SpatialChat.

After a full day of activity, it was really nice finishing on SpatialChat. The CTO and CEO gave closing remarks, commenting on the day itself as well as the ideas that people had come up with. Both executives had participated in the day as well and loved it. There was a great feel-good vibe as people were able to share their appreciation for getting away from the normal routine to do something different. There was a real sense of energy from everyone, for what they had done during the day and for how it felt to be so creative.

I finished the day feeling completely buoyed upon all these good feelings and was so happy that we were able to successfully run this creativity workshop, 100% remotely. If you or your team or your company are hankering for something different, I’d highly recommend giving it a try.

Rajit is a software engineer in the core platform team. He’s passionate about collaboration, whole-team quality ownership, and salsa dancing.

Subscribe now and get exclusive news, interviews and stories.

What are enterprise blockchains?

iov42: The trust-building platform for governments

Thank you for subscribing to the iov42 newsletter. Please click the button button to confirm we have the right email address for you